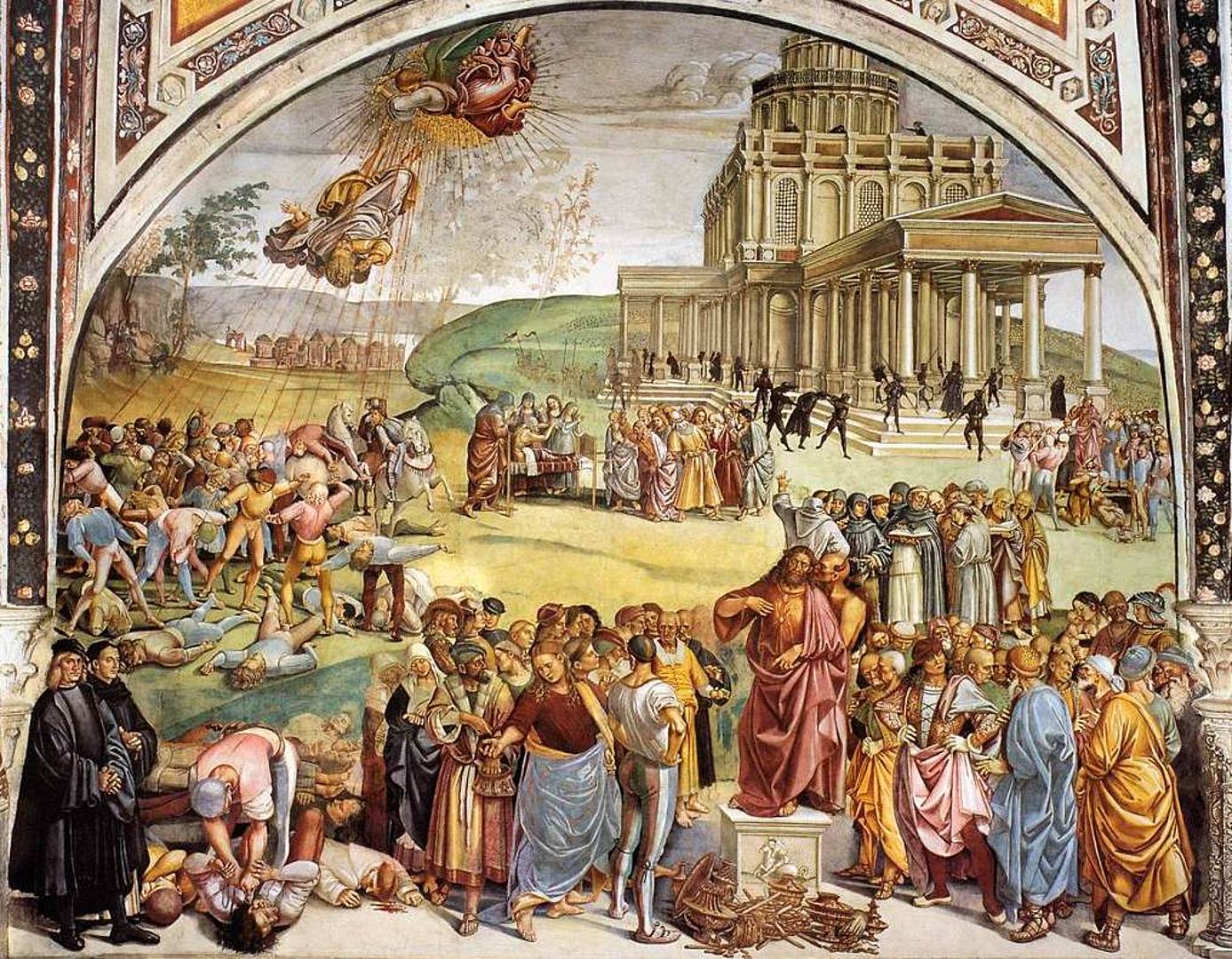 The Apostle John is the only New Testament author to use the term “antichrist” or any derivative thereof. John uses the terms “antichrist”, “antichrists” and “the spirit of antichrist” for a total of 5 references in his epistles.

Many scholars believe that the person referred to by the Apostle Paul as “the man of lawlessness” in 2 Thessalonians 2 is the same person or phenomenon referred to by John as “the antichrist.” Both figures fulfill a pattern that originates in the Book of Daniel and that reappears in John’s vision of the Beast in Revelation 13, giving us a number of passages to consider in this attempt to produce a composite sketch.

The first thing we can say with some confidence is this:

1.  He will be active all throughout “the last hour”

In 1 John 2:18 the Apostle writes to his people saying:

The Apostles understood the entire period between the ascension of Christ and his return to constitute “the last days” or “the last hour”. With the work of redemption having been accomplished by means of all the great events associated with Jesus’ First Coming, there was nothing left to do apart from the few and final events associated with Christ’s Second Coming and therefore, in that sense, it was and is the last hour.

John expected “the antichrist” to be very active in this entire period – the period that exists only by the grace and mercy of God for the purpose of extending the Gospel invitation to people from every tribe, tongue and nation on planet earth.

2. He is a spirit, a pattern and occasionally a person or persons

In the same verse cited above, John refers to “antichrist” and “antichrists”, then in 1 John 4:3 he says:

“This is the spirit of the antichrist, which you heard was coming and now is in the world already.” (1 John 4:3 ESV)

John conceives of a person, persons and a general animating spirit. Likewise Paul in 2 Thessalonians 2 spoke of a man that was coming, who was now restrained, while a mystery of lawlessness was perpetually active in the world:

“For that day will not come, unless the rebellion comes first, and the man of lawlessness is revealed, the son of destruction … For the mystery of lawlessness is already at work. Only he who now restrains it will do so until he is out of the way.” (2 Thessalonians 2:3–7 ESV)

This spirit, who manifests as a person or persons, operates according to a recognized pattern. Tremper Longman III points out that:

“Antiochus becomes an apt symbol for the one Christians know as the Antichrist.”[1]

The stories of Antiochus IV Epiphanes in Daniel 7-10 are highlighted because they establish for us the general aims and approach of antichrist, whenever and wherever he manifests in the world. Putting that all together, I think it can be suggested that there is a spirit of antichrist that operates perpetually during the last days, who occasionally manifests in human form and who will ultimately manifest as a person of enormous power and authority once the entity restraining that development has removed the current restrictions upon his activity in the world.

3. He opposes the Apostolic teaching about Christ

Later in the same epistle, John further specifies that:

“By this you know the Spirit of God: every spirit that confesses that Jesus Christ has come in the flesh is from God, and every spirit that does not confess Jesus is not from God. This is the spirit of the antichrist, which you heard was coming and now is in the world already.” (1 John 4:2–3 ESV)

The spirit of antichrist, whether manifesting in a person or a group of people such as those who “went out from us” in 1 John 2:19, intends to obscure and oppose the Apostolic teaching about Christ. He opposes doctrines such as the incarnation, the Trinity and the Divinity of Christ. He would have people recognize Jesus as a great teacher, a moral leader, a political prophet but not as the Messiah and incarnate Son of God.

In line with the general pattern established in the story of Antiochus Epiphanes IV we expect the antichrist to attempt to seize the power of the state in order to harass and oppose the saints of God. Antiochus seized power through deceit and guile and became, for a season, the most powerful ruler in the known world. Likewise, in Revelation 13 it says of the Beast who arises from the sea:

“And to it the dragon gave his power and his throne and great authority.” (Revelation 13:2 ESV)

This authority appears to extend beyond the borders of any one single country:

“authority was given it over every tribe and people and language and nation” (Revelation 13:7 ESV)

By means of this demonically given authority he will attempt broad and comprehensive changes within society; Daniel says that he:

John’s vision suggests that he will also wield control over the economy:

“Also it causes all, both small and great, both rich and poor, both free and slave, to be marked on the right hand or the forehead, so that no one can buy or sell unless he has the mark, that is, the name of the beast or the number of its name.” (Revelation 13:16–17 ESV)

It appears that if a person does not conform to the changes instituted by the antichrist, then that person will be effectively shut out of the marketplace, unable to buy or sell.

5. He exalts himself as an object of worship

In line with the pattern of Antiochus and also the more recent pattern of Nero Caesar (as per the 666 identification in Revelation 13:18) it appears that the final manifestation of antichrist will attempt to insist on some sort of “emperor worship”. In Daniel 8:10-11, speaking of Antiochus as “a little horn”, it says:

This is a way of saying that, having conquered all powers on earth, Antiochus began to think himself capable of making war on heaven itself. This aspect of the “antichrist pattern” is picked up by Paul in 2 Thessalonians 2. He says, concerning “the man of lawlessness”:

“For that day will not come, unless the rebellion comes first, and the man of lawlessness is revealed, the son of destruction, who opposes and exalts himself against every so-called god or object of worship, so that he takes his seat in the temple of God, proclaiming himself to be God.” (2 Thessalonians 2:3–4 ESV)

Thus, putting Daniel and Paul together, it sounds as though when the current restrictions imposed by God are removed, the final antichrist or man of lawlessness will achieve full, uncontested dominion on the earth and will begin to think himself able to make war on God. He will forbid all forms of worship other than worship of himself.

6. He wears out the saints for a predetermined season

Making war on God will inevitably involve making war on the people of God, as per the pattern established in Daniel:

The “time, times and half a time” seems to refer to a reasonably short period of time – 3.5 years in the case of Antiochus Epiphanes. For 3.5 years Antiochus Epiphanes was given a long leash to harass and oppress the people of God. The beast in Revelation 13 is described in similar fashion:

“it was allowed to exercise authority for forty-two months. It opened its mouth to utter blasphemies against God, blaspheming his name and his dwelling, that is, those who dwell in heaven. Also it was allowed to make war on the saints and to conquer them.” (Revelation 13:5–7 ESV)

42 months is 3.5 years, thus both Daniel and John agree that for a short period of time the antichrist will have complete control over the machinery of a global state and will use that power to rage against heaven and oppress and persecute the saints. He will grind them down. He will conquer them. According to Revelation 11 he will kill them and their dead body (the Greek noun in Revelation 11:8 is singular) will lie in the street for 3 days.

“But after the three and a half days a breath of life from God entered them, and they stood up on their feet, and great fear fell on those who saw them. Then they heard a loud voice from heaven saying to them, “Come up here!” And they went up to heaven in a cloud, and their enemies watched them.” (Revelation 11:11–12 ESV)

“the court shall sit in judgment, and his dominion shall be taken away, to be consumed and destroyed to the end. And the kingdom and the dominion and the greatness of the kingdoms under the whole heaven shall be given to the people of the saints of the Most High; his kingdom shall be an everlasting kingdom, and all dominions shall serve and obey him.’ “Here is the end of the matter.”” (Daniel 7:26–28 ESV)

At the height of his power, in the midst of his attempts to eradicate the faith of the covenant people, decisions are made in heaven, his kingdom comes to a sudden end and his domain is transferred to the saints who shall reign with God forever and ever amen.

Here is the end of the matter.