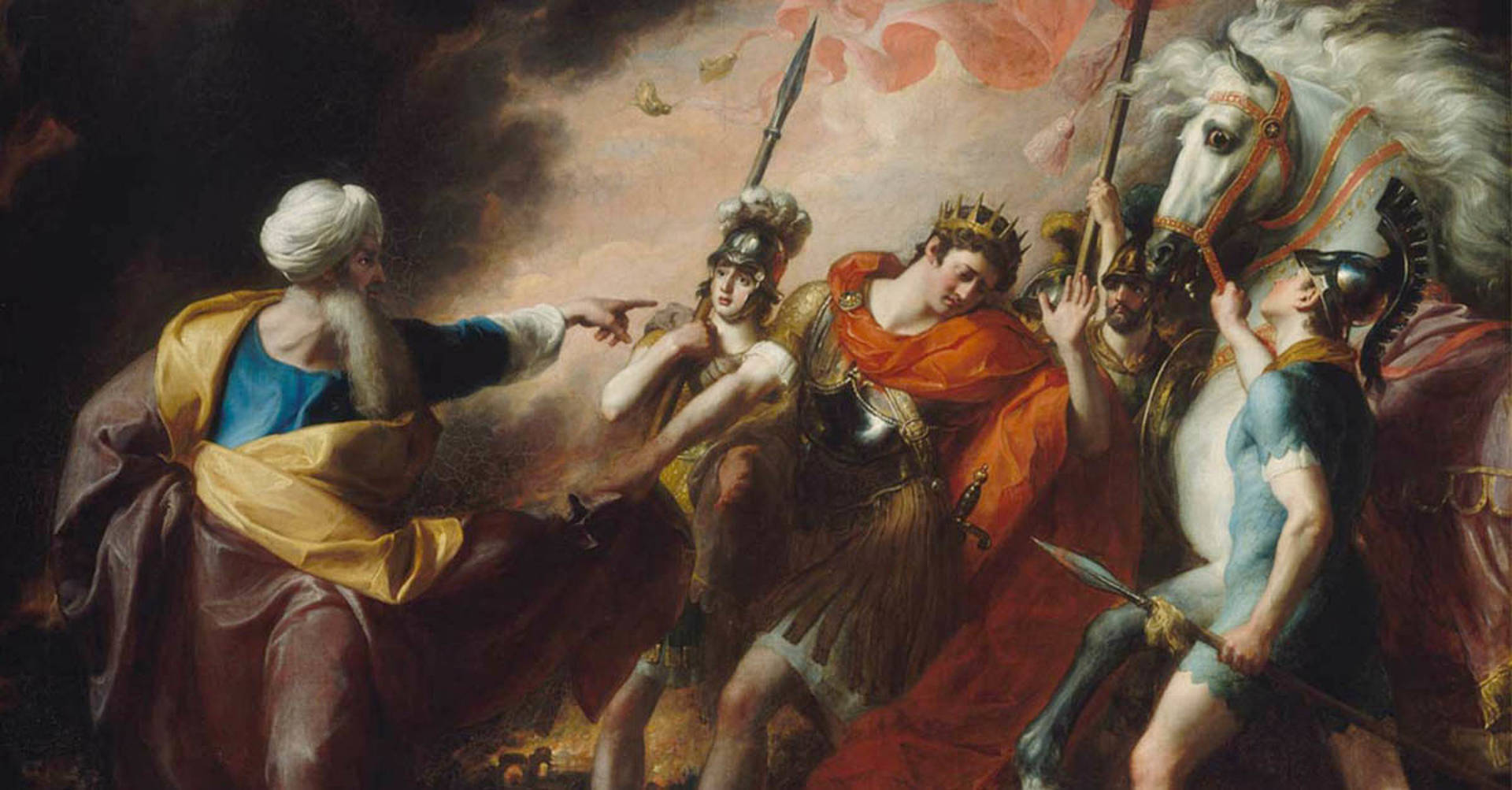 God’s command to utterly and entirely destroy the Amalekites in 1 Samuel 15 has been a cause of stumbling for many Bible readers over the years. The command itself leaves little room for compassion or mercy:

Thus says the LORD of hosts, ‘I have noted what Amalek did to Israel in opposing them on the way when they came up out of Egypt. 3 Now go and strike Amalek and devote to destruction all that they have. Do not spare them, but kill both man and woman, child and infant, ox and sheep, camel and donkey.’ (1 Samuel 15:2–3 ESV)

This seems to many to be at odds with what the Bible says about God’s compassion for human beings and animals elsewhere. The Lord rebuked Jonah for being upset about the repentance of Nineveh, which served to forestall their destruction, saying:

“And should not I pity Nineveh, that great city, in which there are more than 120,000 persons who do not know their right hand from their left, and also much cattle?” (Jonah 4:11 ESV)

So why did God command the absolute destruction of the Amalekites – men, women, children and cattle – instead of sparing them as he did in the case of the Ninevites?

The Amalekites persisted in their sin

The most immediate answer would seem to be that unlike the people of Ninevah, the Amalekites did not repent, though they were given plenty of time to do so. In Genesis 15 God says to Abraham that his people shall sojourn in Egypt until the time of their redemption corresponds with the end of the grace period extended to the Amorites:

“And they shall come back here in the fourth generation, for the iniquity of the Amorites is not yet complete.” (Genesis 15:16 ESV)

God won’t give Israel the land until it is just and appropriate to take it from the Amorites. The Exodus and Conquest are thus simultaneously works of salvation and judgment. A comparison of texts like Deuteronomy 1:44 and Numbers 14:45 suggests that “the Amorites” and “the Amalekites” were two ways of referring to the same people. That means that God gave the Amalekites more than 400 years to turn from their wicked ways – as compared to the 40 days that he gave to the people of Nineveh – but unlike the Ninevites, the Amalekites did not repent. They persisted and progressed in sin and wickedness.

The Bible is very clear: those who do not turn from their sin will eventually fall under judgment. The New Testament Apostles did not understand that reality to have been nullified by the Gospel of Jesus Christ, rather they understood this Old Testament story, and others like it, as:

God has a settled antagonism against sin. It has no lasting place in his creation. Therefore, all who are wise will forsake their sin and seek absolution through the means that he provides. Otherwise, their fate, will be identical to that of the Amalekites.

The Amalekites harassed and abused the people of God

The immediate reason given for the destruction of the Amalekites in 1 Samuel 15 is given in verse 2:

Thus says the LORD of hosts, ‘I have noted what Amalek did to Israel in opposing them on the way when they came up out of Egypt. 3 Now go and strike Amalek and devote to destruction all that they have. (1 Samuel 15:2–3 ESV)

In Genesis 12 God entered into covenant with the family of Abraham. In doing so he created a line of promise and blessing that was intended to encompass all the people in the world. He said:

“I will make of you a great nation, and I will bless you and make your name great, so that you will be a blessing. 3 I will bless those who bless you, and him who dishonors you I will curse, and in you all the families of the earth shall be blessed.” (Genesis 12:2–3 ESV)

But the LORD afflicted Pharaoh and his house with great plagues because of Sarai, Abram’s wife. (Genesis 12:17 ESV)

This principle remains active throughout the entire Old Testament. Any offense against the line of promise is treated as an offense against God. This principle is transposed by Jesus into a New Covenant key in the parable or metaphor of the sheep and the goats. Jesus compares the final judgment to the work of a shepherd who separates the sheep from the goats. When those privileged to enter the eternal kingdom express surprise over the grace being shown to them, Jesus says:

Who a person is toward the family of Jesus (defined by Jesus as those gathered around him in faith and fellowship in Mark 3:33-34) is who that person is to Jesus. This principle is further illustrated in terms of Jesus’ response to the persecution of the church by Saul in Acts 8 and 9. The Lord arrests him on the side of the road and says:

To touch the people of God is to touch God. An offense against the line of promise invites judgment and recompense from the Lord – as in the Old Testament, so in the New.

The wages of sin is death

If the story of the destruction and death of the Amalekites in 1 Samuel 15 seems discordant with the rest of the Bible, the reason for that more likely lies with the reader than with any lack of consistency in the Bible itself. In Genesis 2:15-17 we are told:

The LORD God took the man and put him in the garden of Eden to work it and keep it. 16 And the LORD God commanded the man, saying, “You may surely eat of every tree of the garden, 17 but of the tree of the knowledge of good and evil you shall not eat, for in the day that you eat of it you shall surely die.” (Genesis 2:15–17 ESV)

As this text makes abundantly clear, enjoyment of God’s creation is dependent upon our obedience. People are free to rebel, if they choose, but the consequence of such rebellion will be death. When Adam and Eve sin they are exiled from the garden and condemned to die:

The wages of sin is death – Old Testament and New. The Apostle Paul said:

“For the wages of sin is death, but the free gift of God is eternal life in Christ Jesus our Lord.” (Romans 6:23 ESV)

All human beings stand under a sentence of death:

“for all have sinned and fall short of the glory of God” (Romans 3:23 ESV)

The Good News of the Gospel is that because of the person and work of Jesus, all human beings may receive the free gift of God which is eternal life. If we confess our sins and hide ourselves under the merit of his blood on the cross, we may be forgiven and by his Holy Spirit, restored. But if we remain in our sins, then we will perish in our sins, as Jesus himself said in the Gospel of Luke:

Wickedness is a cancer which must eventually be removed

Human beings have a special dignity and status relative to God and the rest of his creation. In Genesis 1 we are told:

Then God said, “Let us make man in our image, after our likeness. And let them have dominion over the fish of the sea and over the birds of the heavens and over the livestock and over all the earth and over every creeping thing that creeps on the earth.” (Genesis 1:26 ESV)

Human beings resemble God and represent God. They were created to be his vice regents over all creation. They were to be under him and over everything else. Human beings exercise dominion; that is to say, they exercise influence. When they are in right relationship with God they mediate blessings; when they are in active rebellion, they mediate corruption, chaos and death.

That is why God’s partial acts of judgment and mitigation in the Old Testament tend to be broad and all-encompassing in their scope. The flood did not just destroy rebellious adult men and women – it killed everything and everyone not in the ark. The flood scrubbed the world clean of our contagion. Similarly, the destruction of Sodom and Gomorrah did not just fall upon adult men and women, it fell generally upon the city as a whole – men and women, boys and girls, and cattle.

Human sin affects absolutely everything that it touches.

That is why Paul says in Romans:

“the whole creation has been groaning together in the pains of childbirth until now. 23 And not only the creation, but we ourselves, who have the firstfruits of the Spirit, groan inwardly as we wait eagerly for adoption as sons, the redemption of our bodies.” (Romans 8:22–23 ESV)

This is the inner logic that explains the sequence of redemption. First God must prepare a renewed humanity, and only then can there be a restored cosmos. We are living in the part of the story wherein the opportunity to be on the right side of this process is being extended to all people, everywhere. The Gospel is going forth to all nations and when it has done, then the end will come. The end of the age will involve first separation, and only then, renewal and restoration. This is the sequence taught by Jesus himself:

“Just as the weeds are gathered and burned with fire, so will it be at the end of the age. 41 The Son of Man will send his angels, and they will gather out of his kingdom all causes of sin and all law-breakers, 42 and throw them into the fiery furnace. In that place there will be weeping and gnashing of teeth. 43 Then the righteous will shine like the sun in the kingdom of their Father. He who has ears, let him hear.” (Matthew 13:40–43 ESV)

“Repent therefore, and turn back, that your sins may be blotted out, that times of refreshing may come from the presence of the Lord” (Acts 3:19–20 ESV)

And may God alone be glorified.